You are here: Home / Archives for resolutions that stick

I know I say this a lot. As a matter of fact, I know you do too. So, say it with me, “I can’t believe January is over already.”

With one month down, so too are the majority of New Year’s Resolutions. Sadly, by the end of the first week of the first month, 30 percent of resolutions have gone the way of all flesh. Come year’s end, only eight percent remain; it’s therefore accurate to deduce that over 90 percent of us give up on our commitments by the time the ball drops on the next year. How frustrating.

There are a few reasons.

Most of us set vague goals.

For example, we say, “This year, I’m going to take better care of myself,” or “I’m going to lose weight,” or “stress less.” Intention positive? Yep. But without a specific action plan, it’s a nebulous, free-floating, hazy decree, dissipating as quickly as the fog which hugs the coast on a summer morning.

Another cause for failure is relying too much on the wrong definition of willpower, too often seen as our ability to white-knuckle bully our way through temptation.

Willpower is NOT the ability to take a long-term stand, plant our feet, cross our arms, and defiantly proclaim, “I won’t give in!” Rather, if we reframe the definition to, “I won’t give in THIS ONE TIME,” we alleviate much of the self-imposed pressure, upping the odds we’ll actually accomplish what we say we want.

Willingness to forgo short-term pleasure for a long-term benefit is rarely easy, and when stressed, tired, angry, or sad; it essentially puts us at odds with our own internal drive, paradoxically increasing the stressor and further eroding the potential for success. This causes self-flagellation and – in the end – we throw in the towel “until next year,” repeating yet again the hopeless cycle.

Backing this up are studies conducted by David DeSteno, professor of psychology at Northeastern University, and author of Emotional Success: The Power of Gratitude, Compassion, and Pride. As he points out,

“Choosing to rely on rational analysis and willpower to stick to our goals, [is] disadvantaging ourselves … If using willpower to keep your nose to the grindstone feels like a struggle, that’s because it is. Your mind is fighting against itself. It’s trying to convince, cajole and, if that fails, suppress a desire for immediate pleasure.”

Professor DeSteno proposes that gratitude and compassion are more likely to yield valuable results because those emotions naturally lead us to be patient, which logically, increases the odds that we’ll stick with a task.

END_OF_DOCUMENT_TOKEN_TO_BE_REPLACED

One characteristic I appreciate about Christopher Nolan’s directorial style is that he respects the audience’s intelligence. 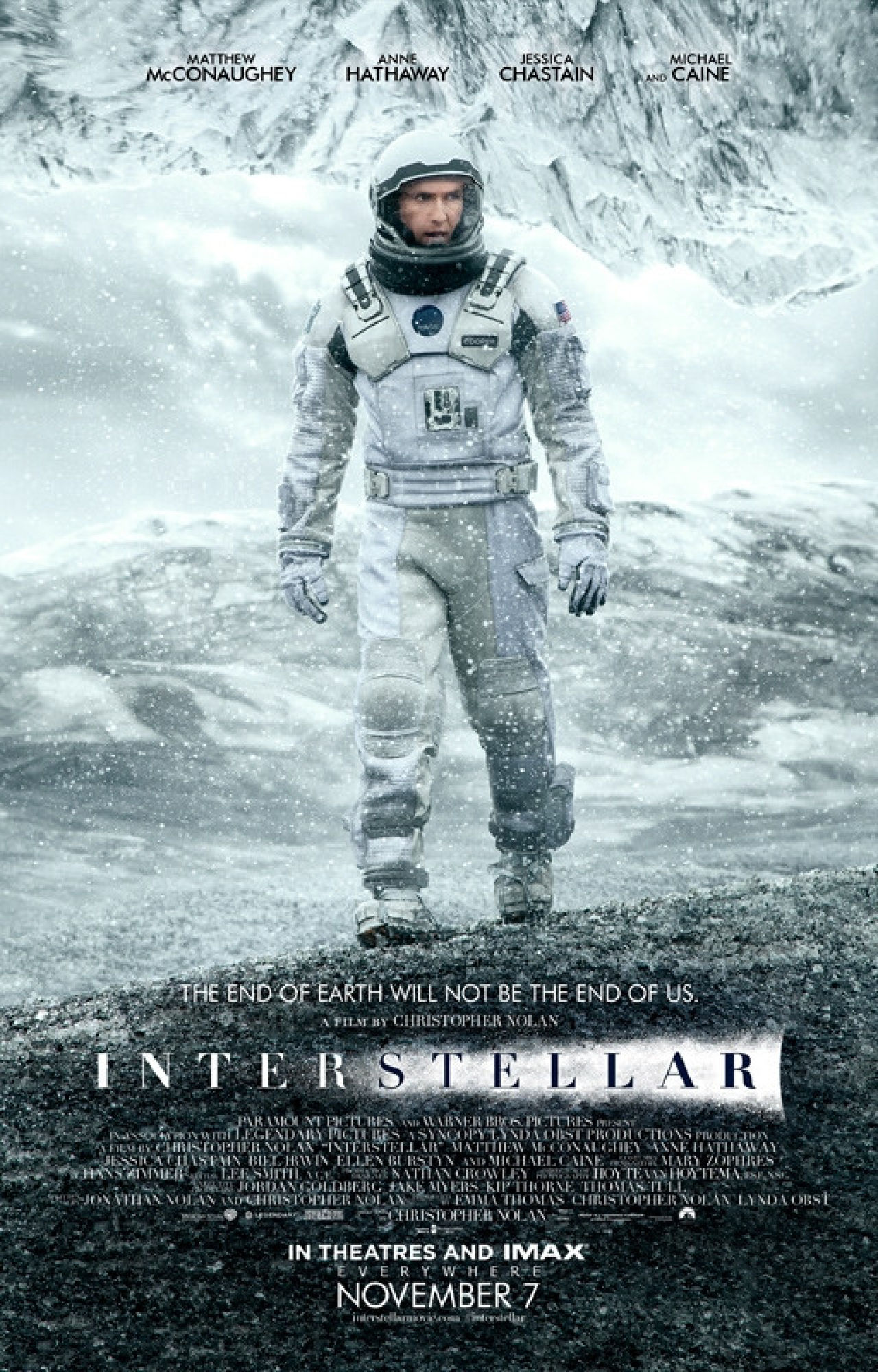 While so many movies are recycled sequels or targeted to drunken partiers, it’s refreshing to find a filmmaker who thinks more of his viewers, rather than less. So I recently ponied up a wad of cash to go to the cinema (I even paid nighttime rates!) and watched a heady sci-fi flick called “Interstellar.”

No spoiler alerts, but the butler did it. (Just joking.) Anyway, to sum up the film in the space I’m allotted in this column would be nearly as improbable as some of the concepts outlined in the story. Yet the main gist involves Matthew McConaughey and crew seeking out a new planet for humanity to call home via multi-dimensional, time-shifting space travel. I warned you: heady.

If you’re into sci-fi, it’s a great use of three-hours and, with the exception of some doubts I share with astrophysicist/celeb Neil deGrasse Tyson about traveling through black holes, the story is tight. (Of course, I’m pretty sure Mr. Tyson is not even aware that we share said concerns, but I’m certain he’d be delighted by my support.)

Anyhoo, I bring this to the conversation because the story reminded me that — although not as extremely as are the characters in the film —we’re all moving through time.

For us however, it’s limited to one direction and we are not given the ability to jump dimensions and re-chart former decisions we now regret.

Moreover, since the new year is rapidly approaching and January is ground zero for us to be inundated with reminders to make resolutions, I am jumping the gun to share a unique take on how to create that new you. Every year well-intended folks who espouse resolutions tell us to focus on positive actions, such as “I will go to bed at 10:00” or “I will use less salt.” Equally true, every year, somewhere north of 80 per-cent of people give up on their goals within their first three weeks. Something is obviously off-kilter.

That system is flawed because, firstly, “If you don’t know where you’re going, how will you know you’ve arrived?”

END_OF_DOCUMENT_TOKEN_TO_BE_REPLACED

Each December, as the year comes to a close, most of us start to evaluate where we are in life. We think about how we live and what we would like to change in the upcoming year. Then, we make New Year’s resolutions, resolving to deliberately implement the changes we want to see. Unfortunately, that’s as close as most of us get to achieving these goals. After the champagne toasts and the midnight kisses, we go back to business as usual, and don’t even remember our resolutions until February or later, which is obviously the wrong time of year to start implementing change by society’s standards.

But there are ways to take initiative and achieve some of the goals you set for yourself any time of the year, not just the end or beginning. After all, you don’t need a new year to make a new you.  END_OF_DOCUMENT_TOKEN_TO_BE_REPLACED

One can always tell the time of year by the dominant color at the greeting-card stores.

Starting with Spring, we begin the pastel season. We advance without delay into the “red, white, and blue” period; followed by “Orange and Black;” with a brief flurry of “Brown, Red, Orange and Forest Green” in November. (The colors for the latter part of the year shift quickly because the “Red Green” season dominates everything.) We conclude this colorful journey with the “RED!

RED! RED!” season, a period into which we are now firmly ensconced.

Aside from romance, this time of year also sadly signifies a type of break-up; the ending of well-intentioned resolutions proudly and honorably stated just four short weeks ago.

I have never been a big fan of resolutions. I’ve never done them; I don’t think I ever will. Don’t get me wrong; I absolutely firmly believe that making commitments and setting goals are essential if I want to direct the changes in my life. I also don’t have a problem in the world with making them in January. I mean, sure, why not? January’s as good as any month.

But that’s the point: January’s as good as any month. Why do we feel that if we “blow it” in January, we can’t reestablish them some other time? Why not put forth a “February commitment;” or honor the father of our country’s honesty with a “George Washington Day Promise;” or pick Valentine’s Day to state my “love-myself-enough-to-change” vows? Granted, they might sound ridiculous; but are those dates of any less value than January 1?

Choosing goals basically because it’s a “that time of year” (and that’s when everybody does them) makes us less inclined to achieve them. Why? Because they’re not driven by an inner aspiration, but rather forced by external dynamics.

Long-term change (does any other type matter?) must be borne from within, not pushed upon us by outside forces. Yes, external drivers, such as weighing a certain amount, not fitting into your clothes, crossing a landmark age, going through a break-up, or losing a job; can be powerful triggers. Each will get you moving, for sure. But, once the initial pain has diminished, so does the drive to continue the very behavior which caused its dissipation.

END_OF_DOCUMENT_TOKEN_TO_BE_REPLACED

I take pride in this column.

Every Wednesday for eight years, I plant myself at my computer and conjure up what I hope is the best way to utilize the power of 600 words. Sometimes, ideas explode forth with volcanic fury and I cannot keep up. Oft times, I rearrange the pixels on my screen for the better part of a day. However, I trudge on until I am satisfied enough to forward it with pride to the editors who so graciously publish and post it.

What astounds me is which pieces get the most, or least, feedback.

Articles I’m convinced will generate a firestorm sometimes barely ignite a spark, whereby those I presumed would simply cause quiet contemplation will produce a flood of reactions via email, phone calls, and strangers approaching me to continue the discussion. Last week’s column (Practical, simple advice to feel better quickly) was of the latter category. I was pleasantly stunned with the number of comments about its practicality and helpfulness. Therefore, I will take it deeper.

What I did not have room for in that piece was the preliminary step, even prior to changing one’s ideas and behaviors. Preceding the rearrangement of one’s routines, one must query of himself: “Why am I going to change this?” Whether the topic is diet, relationships, finance, or attitude; this question is essential as it establishes motive, which affects the likelihood of success — or failure.

The answer will fall into one of three main categories:

With dedication, planning, and patience, the odds of success from number one or two is strong. This is so because the drive is internally motivated. Contrarily, if the inner voice replies with should, the results — if any — will be short-lived.

“Should” is the word used by the invisible committee of “they” to run our lives.