You are here: Home / Archives for co workers

Leave a surprise note for someone. 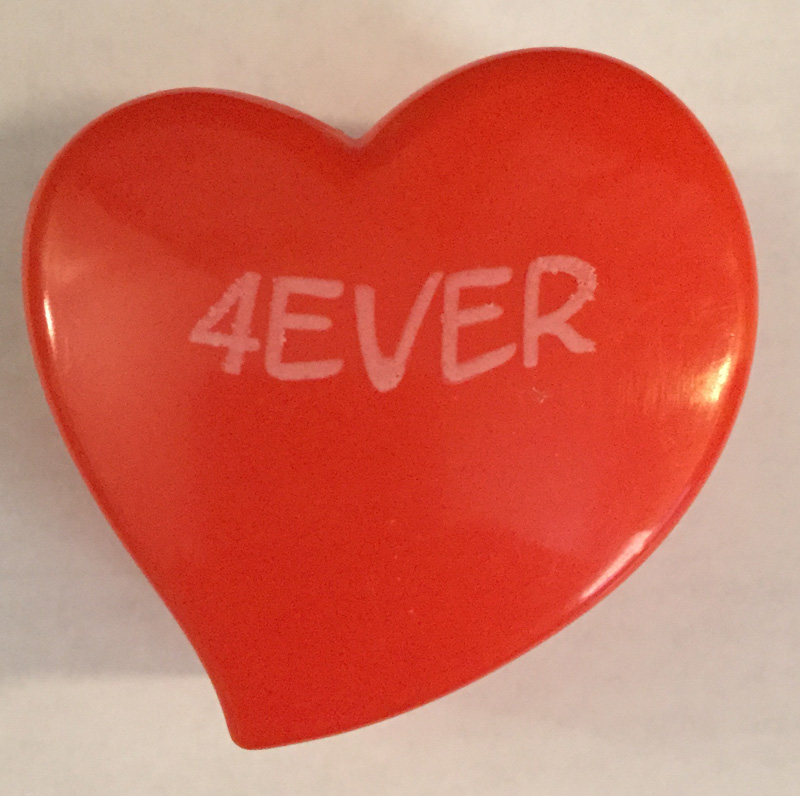 Remember how you felt the last time someone left you a surprise note?

Whether it was your spouse, your parent, or just a friend; there’s something special about finding a friendly note when you least expect it.

No matter how good your mood was before you got the note, it got better afterwards.

A few years ago, I bought some really inexpensive plastic hearts at a dollar store for Valentine’s Day (above). I put candies in them for my wife. However, I still have them and periodically, I will put short, fun notes in them and hide them in various places around the house for her. It might take weeks before she finds them – and I’m sure we’re still missing some that were never retrieved. I don’t tell her. As she stumbles upon them, it brightens her mood and mine (because I’ll hear her surprised laugh or “Aww, that’s so sweet!).

Why not try it yourself and watch what happens to your mood?  (No, it doesn’t have to be a romantic note.)

Examples of what you could do:

END_OF_DOCUMENT_TOKEN_TO_BE_REPLACED

Some think I have a tendency to be “curt” or “too direct” in my communication.

Of that group, there are those who appreciate it, and there are those who urge me to “soften what I say.” I believe I am diplomatic, and I know I am most certainly aware of the feelings of the person to whom I’m speaking; foremost in my thoughts being, “How would I want someone to say this to me?”

But — especially in matters of high import — the way in which we construct what we say is essential. Tying oneself into a verbal and linguistic Gordian knot to avoid taking responsibility for what is truly meant so dilutes the message that the recipient is unsure what was being said from the get go. (Example: Have you ever listened to a politician answer a direct question? It can be painful.)  This type of tête-à-tête serves no one, exacerbating the issue. Direct interaction — delivered in a thoughtful, sensitive fashion — is not rude; it shows respect to the recipient, while causing the deliverer to be more precise in which words he or she chooses, lowering the possibility of conflict.

With that as my bias, let me hoist my High Crankiness upon my soapbox yet again.

If you ever have to tell someone something you think they need to do differently, or something you don’t like about what they do, raise your hand prior to opening your mouth and take with me this pledge:

“I refuse to say anything like ‘Everyone thinks you need to do this,’ or ‘All your co-workers are concerned,’ or ‘Some people say…’”

Hiding behind “everyone else” or “what others say” is — frankly — just plain cowardly. END_OF_DOCUMENT_TOKEN_TO_BE_REPLACED

For the majority of presentations I conduct, I administer an on-line anonymous survey to get a better feel for what’s going on inside the organization.

Question number one is, “On a typical day, how would you rate your attitude?”

I’ll fess up the fact that it’s not a very scientific question, but neither do you need to work for NASA to answer it. In a nutshell, it’s a fancy way of saying, “How ya’ doin’?”

Out of the thousands who have responded, approximately 79 percent have said that their average-day attitude is “pretty good” or “extremely upbeat.” In effect, that could mean that you — the person reading this — has about an 79 percent chance of saying your attitude (most of the time) falls in one of those two categories. (By the way, only one percent responds “extremely poor.”)

Another way to parse that would be, if we were to ask people to use a one-to-ten scale, with the highest number being “ecstatic,” and the bottom being “suicidal;” the regular person on an ordinary day would say, “It’s about eight.”

Question two rates in the same fashion the attitude of those with whom we interact most often: family members, co-workers, and friends. Here the indicator slides to 52 percent. Using the same interpretation as above, that implies that we feel that, although we’d give ourselves an “eight,” we’d label others a “five.” (Imagine how much it would deteriorate if they didn’t have the pleasure of our charming, upbeat positivity to buoy their sagging moods!)

Finally, question three inquires about, “The attitude of those with whom you come in contact on a daily basis?” That scope involves everyone else we bump into, such as clerks, attendants, or phone reps, in effect the river of population flowing across our paths in a typical 24-hour period.

Using the same measuring scale, we sense that only about 31 percent of “those people” possess a “pretty good” or “extremely upbeat” outlook. To spin that yet one more way, we feel that only about one out of three, or one-third, of everyone we meet has a better-than-average attitude. 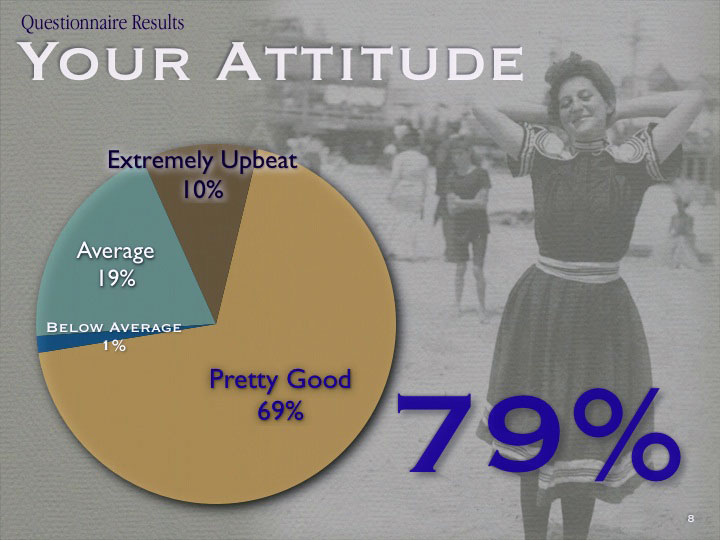