You are here: Home / Asking for help / Yes, it Could Go Badly…

The first involved a powerful video featuring CNN’s senior international correspondent, Ivan Watson, as he reported from a helicopter flying to Mount Shingal in Northern Iraq. Their mission was to drop supplies to those trapped there. Upon touching down, the aircraft was besieged with hordes of people, so desperate to escape that they were throwing children on board in what Mr. Watson accurately described as “chaotic” and “crazy.”

As they flew back over the front line, with the rat-tat-tat of machine guns firing at the enemy below, the civilians on board were covering their ears, many sobbing uncontrollably, eventually changing to tears of joy as they reached their destination.

My son texted me,

“I know you are a big Robin Williams fan. He passed away apparently due to suicide. Beyond sad.”

Again I was surprised as I felt tears well up. 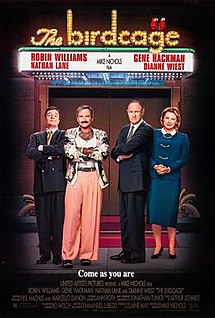 I never met Mr. Williams but I, like so many millions, have been impressed for decades with his quick wit and wide range of talent. Possibly however my strongest bond to him was that he starred in the movie “The Birdcage.” In addition to it being one of my favorites, my last memory with my mother before she passed was the two of us watching that film together and, despite her condition, we were laughing. Robin Williams’s humor is inextricably intertwined with my last moments with my mother; that’s powerful stuff.

Mr. Williams’s heartbreaking suicide is a reminder that, despite all he had and what looked like a glamorous life, he was tortured by demons of depression and addiction. How dreadful to have the world at your beck and call and, because of an imbalance of brain chemistry, be unable to see light at the end of a non-existent tunnel. Should he have been able to reach out, countless people would have stepped to his aid.

We have also been schooled that “depression” is not “being sad,” and the appropriate response to someone who suffers from it is not, “look on the bright side.” Like cancer or hypertension, it’s a disease, and has been tragically illustrated, can be just as deadly. As with the Edwin Robinson poem, Richard Cory, appearances might deceive.

So, to address the question: Why do these seemingly unrelated events get juxtaposed in my column?

In each instance, there but for the grace of God, could be any one of us. In another time or place, my wife and I could be fleeing tyrants, scrambling to survive. More probably however, at any moment, any one of us can be struck down with a debilitating condition robbing us of the will to live. All our hopes, dreams, and plans wrenched from us neither with notice nor with concern for who we are. We are all alike.

If we are not throwing our children into helicopters, scrambling for boxes of rations, our health is holding out, there’s food in the refrigerator; and a roof over our head, maybe we need to give thanks. I’m not being preachy; for I’m as guilty as the next person of getting cranky over “small stuff.” It ticks me off that I can’t eat whatever I want. I see red when I’m stuck in traffic. Or — God forbid — it takes 30 seconds to load my Facebook page! Gasp! Ain’t it awful?

Nevertheless, these truly are first world problems and can be smoothed out with a dose of patience and a salve of priorities. And, yes, in an instant, everything can be shattered; it’s true.

Although equally true is it hasn’t.

So in the present, if there’s some blue sky in your life, join me and remember to put things in perspective and enjoy what you have right now; for that’s the only time we have. (It also wouldn’t hurt to hug your loved ones more and take a walk in the sun more often.) If you’re doing okay, count your blessings; be grateful for what you do have.

Conversely, if your world is being torn asunder, please reach out. Whether you need a friendly hand and a loving hug, or a helicopter, someone is waiting to help you.

About the author: Scott “Q” Marcus is a nationally known weight loss expert for baby boomers and the CRP (Chief Recovering Perfectionist) of www.ThisTimeIMeanIt.com Get his free ebook of motivational quotations and one year of his highly-popular Monday Motivational Memos at no charge by visiting his website. He is also available for coaching and speaking.