You are here: Home / Archives for living in the moment

From its dawn through the mid-twentieth century, 90 percent of all gloves sold in the United States were manufactured in Gloversville, New York; making it one of the most appropriately named cities on the continent.

Originally known as “Stump City” because of all the trees that had been cut down it was incorporated in 1890. Having spent three weeks there, I can tell you firsthand that the sidewalks have probably not been repaired since that date. In many places, taking a walk was akin to scaling miniature cement mountains, circumventing canyons, crevices, and summits that substituted for a walkway.

Yet, it surpassed Augusta, Maine’s sidewalks, which were non-existent.

Trying to navigate the roadway to the shopping center, a distance of about one half mile, was analogous to open field running in a war zone. One scouts oncoming traffic waiting for a break, upon a clear patch, dash hurriedly down the road to the next safe haven, pause again for traffic, and repeat the process. (If more communities had decent sidewalks, it sure would help solve our obesity problem. However, that’s another topic.)

While on the road, I visited a 20-foot tall chocolate fountain in Alaska. I resisted the urge to climb in, but succumbed to sampling real honest-to-goodness Vermont-made maple syrup while in Burlington. If you have not this pleasure, imagine the taste of a warm sunrise lightly brushed with natural honey gliding over your tongue, evaporating into airy nothingness.

Although mostly work-related, my journeys were book-ended by highly personal, deeply emotional events.

END_OF_DOCUMENT_TOKEN_TO_BE_REPLACED

(Editors Note: This is from ezinearticles.com; full information is at the end of the article.) 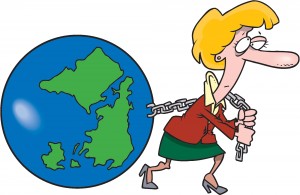 Have you ever felt that incredible weight of the world on your shoulders, spinning out of hand? I’m here to show you ways to relieve that overwhelming feeling of stress that just sends you reeling into the pit of doom.

1. Step back and find the humor.

Today I was visiting with a friend, after several months of missing her. I mentioned that my son was out of control these days, and we talked about how we’d both threatened our sons with not making their next birthday if they didn’t settle down. Neither of us would do anything to hurt our sons, and they know that. But suddenly we both felt the humor in our empty threats. Their behavior seemed less extreme and we knew we’d be able to get through the next moment because we were laughing at the last moments.

2. Go ahead and cry your heart out.

Tears are cleansing. Allow your tears to wipe clean the heavy burdens you’ve carried. Accept that part of life as what it is and move past the stressor to a new step. Sometimes we forget the blessing of rain upon dry land. When the storms come, the land may be barren, but as sure as the raindrops fall, there’s life beneath the surface. END_OF_DOCUMENT_TOKEN_TO_BE_REPLACED