You are here: Home / Change / Dog Teaches Man: How Adopting a Rescue Dog Reminds us About Attitude

I’ve heard tell that dog owners (or “guardians” as some prefer) look like their dogs.

I did not realize with how much haste that transpires.

We have been considering adopting a dog for a few years. As with any important project, we began by identifying what we wanted. One, he must be a rescue dog. Two, she must not be bothered by our two cats (of course how they respond to the dog will be their decision). Three, we wanted a smaller dog that had some personality but was not hyper.  Those were the “must haves,” the remainder were “would likes.” We surfed websites, monitored our newspaper, and checked shelters and animal control with regularity.

Welcome “Jack.” He’s a five-year old mini-Schnauzer with a persuasive, mostly subdued personality who loves our backyard, follows me like a shadow, is housebroken (yay!), and even understands some commands, allowing me the option to train him even more; something I wanted. While I write, he has already taken to lying in his bed, apparently content to watch me type. (I guess he’s hard-pressed for entertainment.) 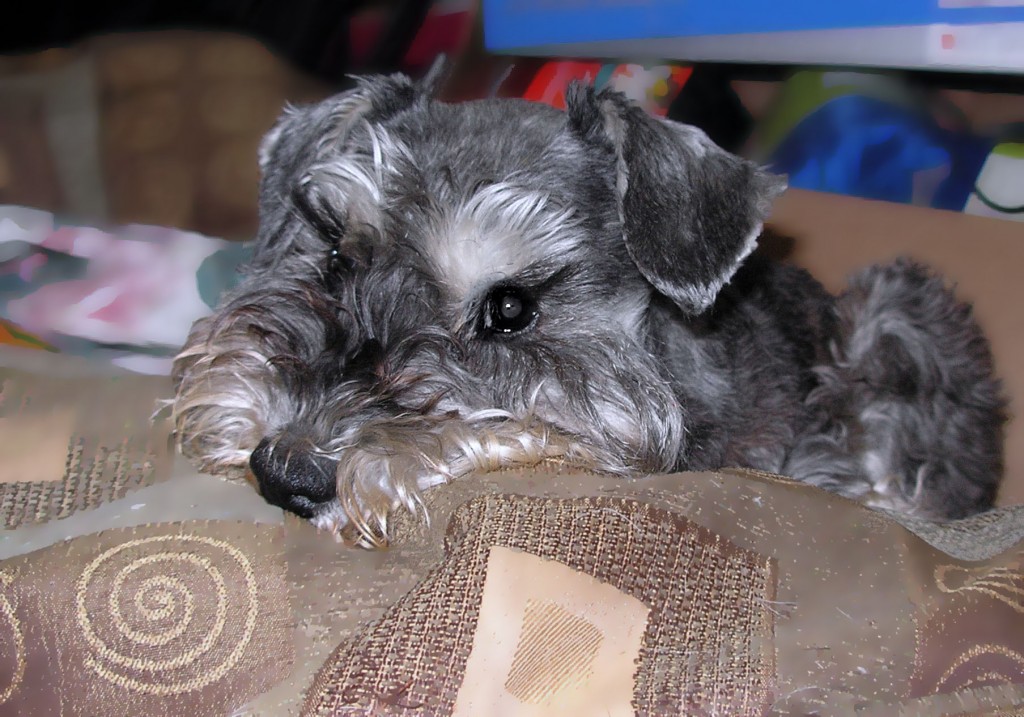 As for similarity — although I did not think of it when I picked him up; he already resembles me (or I do him). His hair, although dark of base, is basically “silver,” slightly disheveled, and he sports a gray goatee in need of a shave. More striking is that he is also into yoga; I’ve seen him doing “downward facing dog” repeatedly. (Insert rim shot here…)

The one attribute of which I am NOT fond is that, although he slept through night one without incident, he is evidently an early riser, quite contrary to myself. A perk of self-employment with one’s home as the office, is the ability to grab a few extra winks each morning, since my commute consists of four stairs. Alas, I fear those days have passed, as Jack is part rooster, prone to rise with the sun (especially ill-fated since this is summer and first light is unfortunately early).

Therefore, today, I awoke far earlier than was my pattern. My wife, snickering wickedly, commented, “Looks like your days of staying up late are over.”

Growling (yet another similarity with a dog), I dragged my carcass from my bed to begin this new, unexpected routine. Change had once again scampered into my life, this time in the form of a twenty-pound canine that could not wait to take a walk. “I must teach him the command, ‘sleep,’” I wearily lamented as I secured him in his harness.

But that’s the way it is, isn’t it? We make our plans and move forth into the yet to come. We believe we’re in control — but it’s illusion. Life steers; we are passengers. Whether changing how we eat, seeking mental health, developing relationships, financial planning, or simply adopting a furry friend, the results of our actions cannot always be predicted nor controlled.

So, once again, I am fine-tuning to the unexpected, a progression without end, and one in which we all engage non-stop. Sometimes, the adjustments are painful; other times, thank God, they are minor. Yet it is unavoidable.

I detest getting up early; it fouls my mood.

But, conversely, I can be buoyed by the outpouring of warmth from this newfound community of “dog people,” which has already been as heartwarming and loving as the joy elicited by Jack when I reach for his leash and we head out into the (too early) morning. It’s my choice.

Now, which one of us is really training the other?