You are here: Home / Archives for sixties

I entered the planet at nine pounds 14 ounces.

Assuming that to be normal, thirty years later, as a newly minted father, I panicked when the doctor informed me that my firstborn weighed six pounds six ounces.

Looking me in the eye, attempting to calm my jitters, he replied, “Six-six is normal. I promise he’s fine.”

“But I weighed ten pounds when I was born!” I protested.

“I can’t help it if you were cruel to your mother,” he replied.

Moral of the story: I was born big, and from that moment, packed on the pounds, tipping the scales at ten pounds for every year.

To explain, I weighed 50 pounds at age five, 90 pounds at age nine, and 130 pounds when I was a teen. From there, I accelerated, reaching 230 upon entering high school — poor timing to say the least. Of the 1107 students in my class, I was the second fattest. Further putting this in perspective, that was in the day when childhood obesity was an oddity, rather than unfortunately as it can be today, quite common.

Kids are brutal, so what were supposed to be some of my best years were anything but. Girls ignored me; guys badgered and bullied me.

Physical education was the lowest of the low.

END_OF_DOCUMENT_TOKEN_TO_BE_REPLACED

A few months ago, I lamented the fact that I would soon be turning 60.

Well, try as I might to deny the inevitable, September 28 has arrived.

I am now officially entering my seventh decade.

Also, as I mentioned, I grok that there are people looking at 60 in their rear view mirrors, most likely shaking their heads, thinking, “Come on Scott. Get over it!” Yet, I remind these naysayers that this is the oldest I’ve ever been. My wife, in attempt to be supportive I presume, has been espousing, “Remember, today is the youngest you’ll be for the remainder of your life.”

Hmmm… I don’t know whether that’s comforting or not. But, what can I say; she’s a child in her fifties. She’ll learn.

So, I went to the doctor for a check up. They checked my weight (“You’re lost a few pounds since last year.” Yay!) and blood pressure (“We need to watch that.” Sigh…)

Then came my height.

I’m going to be vulnerable here so be gentle with your judgment, okay? Most of my adult life, I’ve lied about my height, insisting I’m a towering 5’ 9” when I’m actually a diminutive 5’ 8”. One might rightly wonder why that extra inch matters so much to my obviously frail psyche — and that’s a fair question. Yet, the honest reply is I haven’t a clue. Maybe it’s a guy thing, who knows? Anyway, of late, with newfound maturity, I’ve finally come to grips with the reality that major league basketball is not going to come calling and have accepted my actual stature.

So, it’s one of nature’s practical jokes that I find out I’ve shriveled to five-seven and a half! END_OF_DOCUMENT_TOKEN_TO_BE_REPLACED 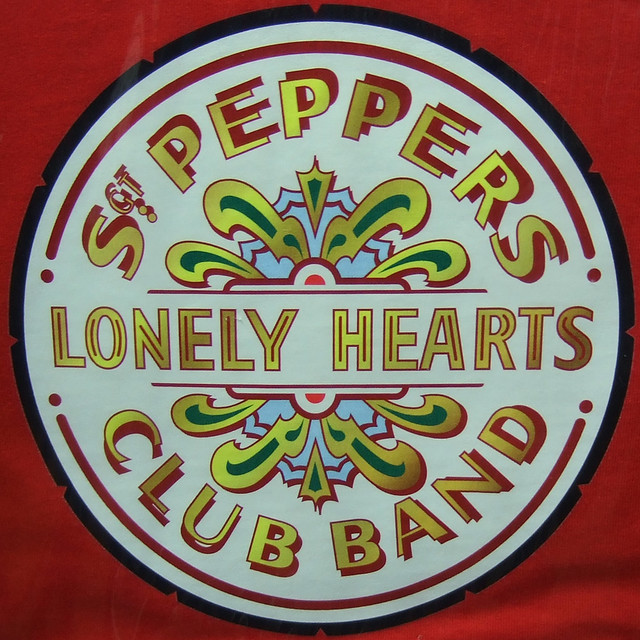 Immediately after the school bell blared the end of the day; Richard, Randy, and I, exploded out of the classroom, saddled up our bicycles, shot out of the school parking lot and peddled furiously en masse to Records Ltd, on the corner of Victory and Van Nuys. Sergeant Pepper’s Lonely Hearts Club Band was available! Before they sold out we must each have one!

Oddly, when we got back home, we each went our own way and collectively, yet separately, listened to our own private copy, phoning each other, or yelling to through open windows, to see what the others thought after each song. One would think it would have been more fun and simpler to all gather together, but who understands the mind of adolescents?

Sure, it has McCartney’s sweetness to it and the lyrics were easily learned, but age 64 was so long into the future that we related no better to it than we would should it be about space aliens (which being nerdy teenage boys, we would have preferred).

Moreover, we had grandparents that age who were just ancient. My grandma, Zlate, appeared so timeworn that I could not possibly imagine that ever happening to me.

Of course, her time was severe. Emigrating through Ellis Island after escaping the persecution of the Czar, she survived horrific poverty, lost her husband at the age of 29, and raised three daughters solo, managing to support them by starting her own junkyard business.

Grandma was strong and determined; no arguing that. But the decades took a heavy toll. With the skin on her hands cracked; face deeply lined; she literally bent under the weight of her survival; staggering sluggishly rather than walking, always with the assistance of someone’s arm supporting her, her oversized housecoat and apron hung loosely around her large frame. She required rest after moving even the shortest distances.

Dianna Nyad recently climbed from the sea to the land at Key West after swimming 100 miles from Cuba. This was not her first crack at it; rather it was number five. She first attempted the crossing 35 years ago, in her late twenties.  END_OF_DOCUMENT_TOKEN_TO_BE_REPLACED