You are here: Home / Affirmation / Thank you for the money tree.

Editors note: This column is a follow up to a previous column, that is worth reading first.

I’ve thought regularly that if the low-life individuals relentlessly attempting to scam us out of our hard-earned income took a few moments and focused on how they might improve society, not only would the world be a better place, but they would perhaps be wealthier.

After all, an individual in a dark boiler room, chained to a desk, deceiving people on the phone can’t be a) very happy, nor b) very wealthy. What a miserable life!

Yet, that’s as much sympathy as I can muster for the scumbags who besiege us with a non-stop waterfall of scam phone calls intent on swindling us into purchasing credit card protection, extended auto insurance, or — now that I’m a certain age — Medicare options.  It’s become so prevalent that I don’t answer my phone; assuming – that if the call is legit – the caller will leave voice mail and I will return the call at my leisure.

Anyway, I doubt my experience differs much from yours. I receive – no exaggeration – between ten and 15 rip-off calls every day. So, when the phone rang, I was loath to pick up. Yes, it showed a local number with a person’s name but I’ve been Charlie Brown to that football too many times. Yet, something inside me said, “Answer it.”

“Hello. This is Scott,” I said as I activated the speakerphone, poised to shut it off immediately upon hearing a south-Asian accent telling me that my computer is infecting the internet. Rather, I heard an elderly woman’s voice crack through the speaker.

I stumbled, “Um, well, thank you. That’s very nice. Who is this please?”

She admitted to being private and didn’t want to disclose her full name. As much as she deserves credit for what you’re about to read, I’ll honor that, and will simply refer to her as “Ruth.” (Which was the name of my mother, who would have been the same age as is she.)

Truth be known, although I’ve written this column for almost 15 years, never before had anyone invited me to their house in order to bestow presents upon me. I wasn’t sure how to handle it.

“I don’t want to tell you,” and then added, almost as afterthought. “I promise I won’t hurt you.”

I’ll own up to lots of irrational fears, but being bludgeoned by a sight-impaired house-bound nonagenarian who’s a fan of my writing isn’t even on the list. It put things in perspective. “Not a problem; where do you live?”

Long and short of it is I arrived at the destination where stood an elderly woman with a wheeled walker grasping a white plastic bag. As I exited the car, she said, “I’m Ruth.” (I had assumed as much.)

Handing to me the sack, she explained, “You wrote that your money tree had died so I wanted to give you one. It’s not much, but I hope you like it.”

Rarely am I flummoxed for what to say; but as I looked into the bag, I could see dollar bills wrapped round the branches of a plastic “tree.” I looked back to her.

“I don’t know how much is in there; it’s not much. I’m sorry. But I thought it would be nice to give you a money tree. I’m sure lots of people gave them to you.”

I laughed; still unsure what to say, “No, this is the only one.”

“Really? I thought lots of people would have given them to you. Well, it was fun, and I wanted you to have it.”

It seemed tacky — let alone ungrateful — to widely open the bag and count the money, so I thanked her as she rolled away with her walker, and placed the treasure in my car. Upon arriving home, my wife and I both beheld our new money tree as it sat on the table, speechless, reflecting on the kindness and creativity of its creator.

We are surrounded by grace and goodness, so often blessed in ways we don’t even know. Would it have been nicer if all the bills would have had Ben Franklin’s face instead of George Washington’s? Yeah, maybe. But to focus there misses the point entirely; there’s no way I’m going to spend it. Conversely, I’m seeking an altar worthy of this gift, and of the generosity and sweetness of someone I never knew who drifted into my life and has now left an indelible impression. Who knows how many times I have walked past countless “Ruths” over the years and never given a second thought, too caught up in my day-to-day? My bad; my loss.

Between you and me, there’s maybe $20 attached to the tree, but it is one of the most precious gifts I’ve ever received. 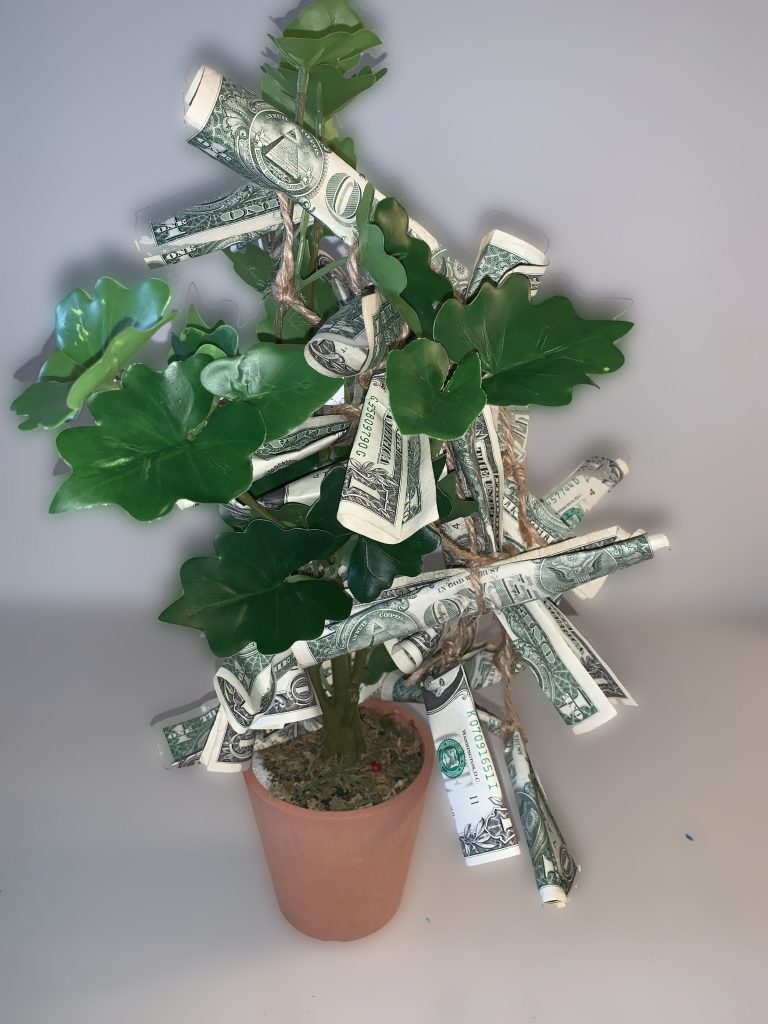 About the author: Scott “Q” Marcus is the CRP (Chief Recovering Perfectionist) of www.ThisTimeIMeanIt.com. He is available for coaching, speaking, and reminders of what really matters at 707.834.4090 or scottq@scottqmarcus.com