You are here: Home / Archives for starchy vegetables

Let us dispel the belief that we have a “do-nothing congress.” 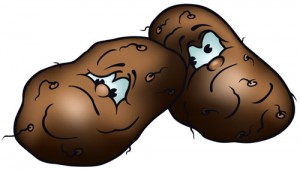 Our Senate recently stood shoulder-to-shoulder in solidarity with the lowly white spud, rebuffing an effort by anti-potato Obama to limit its consumption by schoolchildren. Before you get the inaccurate image of the president and his cabinet slapping french fries from the hands of kindergarteners, you need to know some details.

The administration had proposed limiting the amount of potatoes and other starchy vegetables that can be served in school lunches to one cup per student per week. Beyond that, they wanted to ban them from school breakfasts entirely.

Imagining the horror of a world where breakfasts are without the crunchy, fatty texture of hash browns; and quicker than a fast food chain can deep fry a basket of sliced spuds, the Senate blocked the proposal by adopting an amendment to the 2012 spending bill for the Agriculture Department. The amendment, approved by unanimous consent I might add, prohibited the USDA from establishing “any maximum limits on the serving of vegetables in school meal programs.” Paraphrasing the quotation usually attributed to Voltaire, “I disagree with your choice of Russets but I shall defend to the death your right to eat them.”

In this age of hyper-partisan non-stop bickering and political tantrum throwing, it’s comforting to know that members of our legislature could reach across the aisle for the common good. (It would be nice if it benefited our economy but one must take the victories he gets. Sigh…) Senators Susan Collins, Republican of Maine, and Mark Udall, Democrat of Colorado, set aside partisan differences and defended the starchy spud — coincidentally grown in great quantities in their states — saying that the proposal had no basis in nutrition science. (Not that that has always made a difference in how laws have been crafted previously.)

Said Ms. Collins, “The proposed rule would prevent schools from serving an ear of fresh corn one day and a baked potato another day of the same week, an utterly absurd result.”

Why was the potato singled out, you might ask?